Whether you are a professional carpenter or novice woodworker, you are probably looking to pick up a miter saw. If so, You should know the different types of miter saws to choose the best one.

A miter saw is the most versatile power tools for your DIY projects or cutting tasks. Standard and sliding are two basic types of miter saw. However, there is one more kind of miter saw though it is rarer. That is a combined of the standard, and sliding miter saw designated compound miter saw.

There are no more efficient tools in the market for cutting crown molding, picture frames, and window casements. However, it is excellent for timber framing work.

With a good miter saw, you could make smooth cuts, like crosscut, Bevel Cut, Rip-Cut angled Cut. You can ever make a ninety-degree angle cut.

What is a Miter saw?

The miter saw makes bevel cuts by pulling a spinning saw blade down onto a workpiece or lumber in a short, controlled movement. It is a wood cutting power tool mounted on an adjustable mitering table for cross-cut.

The primary feature of a miter saw is that it can do 90°cuts, with the advantage of rotating the blade to make varying common angles (such as 15°, 22.5°, 30°, and 45°). This feature allows the user to create the first angled cut for useful woodworking tasks.

It is comfortable for cutting larger pieces into smaller ones so we can refine them more using other types of saws. Cutting performances depend on the motor capacity, and types of the saw blades.

Some miter saws have additional features and abilities, but we’ll get to that further down.

A short history of a miter saw

Ed Niehaus invented the power miter saw in 1964, which was designed for Rockwell. That miter saw had several innovations still found today because Rockwell did not patent the design.

Nowadays, numerous manufacturers are leading to improve the miter saw. DEWALT is one of them, who has led the charge in miter saw innovation.

Different types of miter saws: You should know

Although there are many types of miter saw in the market, it is rich in various types of features from the primary two types. We found one more model that is a combined miter saw. All have a saw blade that pivots on an axis to make cuts at a variety of angles.

First of all, We would discuss the three types of  miter saw in this article. So many new features rich miter-saw are being added regularly in the market; we will talk about them later.

What is a Standard Miter Saw?

Before we get the details for sliding and compound miter saws, let’s go to know what a standard miter saw does.

A standard miter saw is the most straightforward version of miter saw – a blade on an arm, mounted to the base, and usually better of making between -45° and +45° degrees bevel cuts.

The main functionality of a standard or basic miter saw is to make angled cuts. However, depending on the width of its blade. it can make rips or lengthwise cuts.

Of course, miter saw dedicated for cross, or angled cuts is invaluable for any framing, molding, and woodworking project. Miter-saw also is a standard or basic miter saw.

Although basic miter saws are designed for making an angled crosscut, most of the miter saw is available in 10 to 12-inch options and have an adjustable scale. Some models can adjust a single degree while others are preset most common angles, 15°, 30°, or 45° degrees.

What is a sliding miter saw?

It will jump to increase 10 to 12-inches for a sliding miter saw. The sliding saw can extend its reach out to 12 or even 16 inches, more than twice the width of a non-slider.

The sliding miter saw is almost the same as the compound miter. However, it can used for on both miter and bevel both types of cutting. The significant difference is in the material’s width they can handle.

What is a Compound Miter Saw?

Since we already discussed what is a basic miter saw, and it will be a little easier to understand what is a compound miter saw.

Compound miter saw is much more convenient than the basic miter saw. You will be able to do more than just miter cuts. It can make a 90-degree angle cuts with an arm in its blade. You can make a bevel cut in addition to miter cuts.

The saw has the benefit of more specialized or critical cutting. Moreover, designed for angles, bevels, and angled-bevels cut. All the cuts are  depending on the blade width.

A compound miter saw is the most accurate tool for making a crosscut on wood, whether those cuts are square, angled, or beveled. It can also perform with non-ferrous metals, wooden boards, thick plastics and of course wood. So far, complicated, but much more affordable.

It has the ability to make an angle, and bevel cut together, creating precise yet intricate compound cuts. You can mount the saw on a workbench, table, or a simple stand mount and install for better performance. A miter saw stand help you to make comfortable and perfect cuts.

When cutting crown molding and other materials that require accurate angled cuts, you cannot choose a better tool than a compound miter saw.

Compound miter saws are excellent tools for DIY or woodworking projects that cover sliding, bevel, and metering functions. However, It can’t overcome its limited cutting capacity in some particular cutting task. 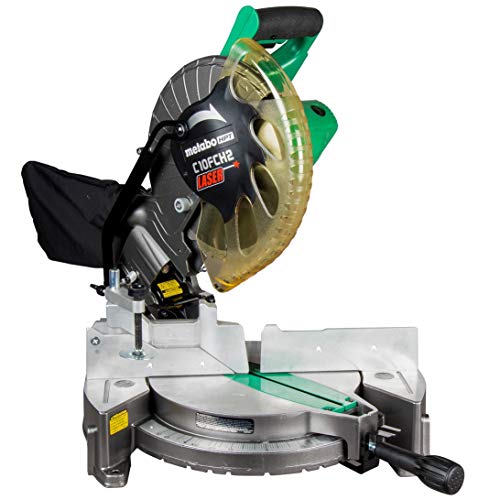 Although there are few primary types of a miter saw, the manufacturers is constantly trying to improve the miter saw, how to deliver better quality miter saw to the user? As a result, we are getting more and more types of mites in the market that are -

Compound miter saw an outstanding tool for a DIY project. However, It can’t make some particular cuttings. Manufacturers always research and try to find out better features to improve a power saw. They added sliding features to overcome the limitations of a compound miter saw.

Having a sliding feature allows you to increase the length and cut through it. Not only that, but you also have the advantage of moving the radial arm forward and backward.

Some of the most expensive miters saw models combine all the features into one handy package. A dual-bevel sliding compound miter-saw allow the arm with a blade to tilt both left and right.

It lets you push forward and backward, all on a mitering table that offers you an extensive range of an angle.

For a more precise or specific cut, nowadays, the manufacturers added laser guidance features on the miter saw. The LED feature illuminates the work area better.

A deck shaped washer is strapped with the blade that produces laser light. As a result, highlights are shown along your cutting line where the edge will run, so you have an excellent idea of your cutting task.

What is a Sliding Miter saw?

A sliding miter slides the blade from front to back. The rail system extends the cutting length.

What is a Compound Miter saw?

Composite miter saws have the advantage of pivoting the blade left and right to cut down through the wood at an angle. And also tilt in a single direction for bevel cutting.

Miter saw it is an essential tool for woodworking or DIY projects. And a must-have tool for your workshop already you have got the idea. A miter saw is designed for a quick and particular cutting task such as crown molding, door frames, window casings, picture frames, and even more.

The saw is work by pulling a mounted circular saw blade down onto the piece that put on a horizontal surface below.

Hopefully, after reading the article, you have a better idea of different types of miter saws. It should be easier to choose a perfect saw as you need.

Each type of miter saw has its own advantage and disadvantage. However, though the compound miter saw is the most popular for the broadest range of users.

Praise you, for spending your valuable time and staying with us throughout this wrap up the article. Happy Brewing!